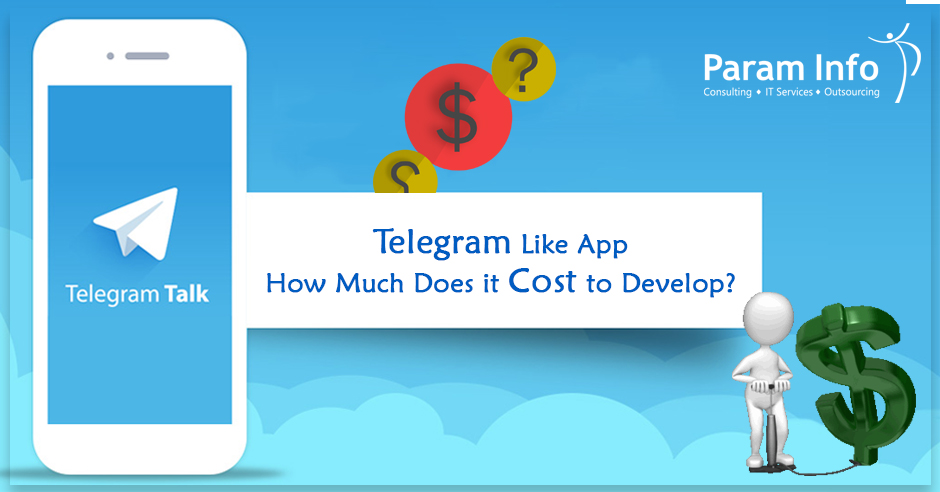 Telegram Like App: How Much Does it Cost to Develop?

By Elina SamantraiMay 7, 2019No Comments

Telegram is an instant cloud-based messaging service and offers you the ability to send the messages and photos over the platform with a self-destruct timer. The success of the app can be attributed primarily to security. The users of the app can communicate without government scooping and as such the app enjoys a huge user base of more than 200 million users. It allows the users to create private groups of up to 2,00,000 members and can even send private messages to contacts. On the other hand, its competitors lag way behind;  Line has 165 million users and Signal still has 10+ million downloads.

Telegram app was founded by Russian entrepreneur Pavel Durov in 2013. He invested an amount of $300 million that he earned by selling the popular social networking app Vkontakte. The phenomenal success of the app has forced many app developers to consider developing an app like Telegram. If you intend to do the same, then finding an ideal mobile app development company becomes an absolute necessity.

Features to Consider Before Developing an App like Telegram

The first and foremost thing a user needs to do before using the app is to register. The developers need to include the easiest sign-in methods that include entering the mobile number. A mobile verification code is sent to the user mobile for the purpose of security. Once you are done with the verification, you are ready to go and can start using the application.

The app developers of the Telegram app has lent utmost importance to security as well as speed. The best thing about Telegram is that it has its own encryption protocol, unlike its competitors. The owners of Telegram has even offered a prize amount of $2,00,000 for those who could decode its encryption, but however, none of them have been able to do it.

Another interesting feature in Telegram is the Secret Chat feature. The features allow the users to set a timer for the messages after the recipient views it and are entitled to self-destruct. Further, if you try to take a screenshot of the messages, it will notify your messaging partner of the same. The messages of secret Chat are not stored on any servers and also they cannot be forwarded.

Telegram’s code is entirely open-source. It attracts the developer community to the platform and offers them an opportunity to be a part of the mobile app development process.

Telegram shares its API and allows developers to employ them in their apps for free. The products that are built on this API are fully legitimate and the app developers can even monetize them.

Push notifications play an important role in updating customers with important information. They inform the customers on two important things; one when a message is delivered and other instance when a user has been added to the group. The push notifications successfully carry out the task even when the phone has been locked.

It is another important feature that needs to be included in mobile app development. With Geolocation, users can easily share the exact location with their friends. For the map implementation in the devices, app developers can use Google Map Android API service for Android users and Map Kit framework for iOS users.

Stand Out Features of Telegram

The features allows admin to promote a group to the Supergroup. It allows users to pin important messages. It gives complete authorisation to the creator allowing him to report and ban spammers, and can even erase message of any user.

It is another exciting feature from Telegram. To facilitate faster browsing, Telegram allows its users to directly include links sourced from the media sources/blog. Hence, a user would be able to read the content by simply clicking on the links.

Chatbot is a software program designed to converse with the users. Chatbots perform most of the automated tasks and offer 24/7 services. When it comes to Telegram, Chatbots perform important tasks that include reporting recent news to managing finances.

Telegram is cloud-based and hence easily allows its users to switch among multiple platforms with ease. So, a user can start typing on one device and can easily switch and continue on the other device. Further, Telegram offers unlimited storage space, unlike its counterparts that give limited storage space. It easily allows users to store unlimited files and retrieve them when needed.

The development cost varies depending on the region and it is likely to differ in markets such as India, US, Europe, and the UK. The cost also depends on the number of features to be included in the app, user-friendliness, the total number of hours taken by developers, reputation of the app development company.