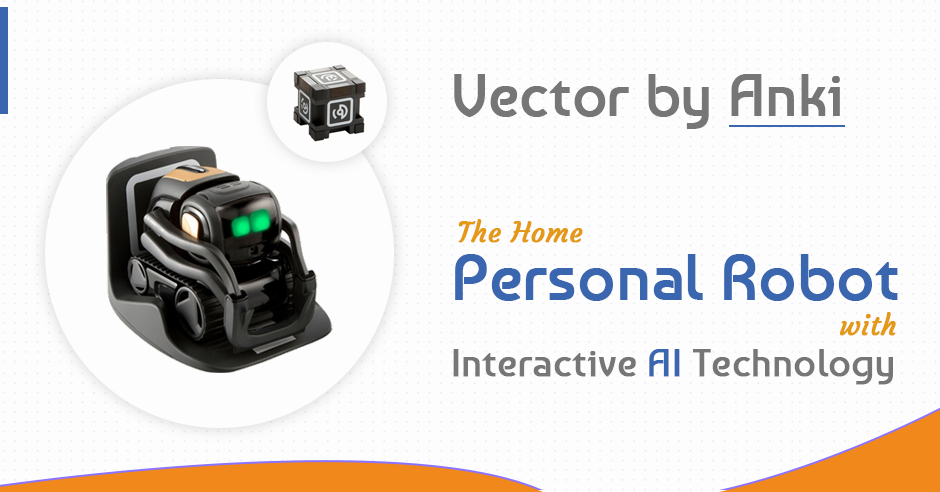 By Cole WestFebruary 28, 2020No Comments

Anki is one of the leading manufacturers of artificial intelligence-based products. Anki is a very old software development company. It is famous for using artificial intelligence in several fields that will make the everyday lives of a person easier. Anki has launched many products for kids based on modern AI Technology. One of the leading products in that list is the Vector. Vector is a personal robot. It is specially designed to sense the weather, comment on it, reply to questions and assist in different works.

Vector as Your Companion

Vector is admired by the users for its adorable nature and impressive features. It can respond to greetings. All you need to say is ‘Hey, Vector.’ It will hear you and respond. It also has an in-built timer and counter that allows it to let you know when that cake is completely baked and needs to be taken out of that oven.

The software developers have incorporated technology solutions in Vector that helps it in interacting with its surroundings. It communicates with the environment with the help of light and sound. This makes it able to recognize people. This feature also lets it avoid any obstacles in its way while moving.

Even though it is really small, Vector is ready on one foot to get a chance to help you. It will wake you up on time, express the reports of the weather, it also has a camera, so it can click photos for you. It is like an adorable side-kick that follows you everywhere and is keen to help you with even the simplest tasks. You will never feel lonely with this around in your house.

The high-tech in-built features of the Vector are what make it a lot more impressive. In that tiny body, it hides the best-of-the-era technologies.

Other Standout Features of Vector

Vector also comes with its little home call the Vector Space. It allows Vector to interact with the activities going around it. The Vector might also be charged in the Vector Space. There is a reason it is called a Home Robot. It is always ready to help you. You can use it to help in the kitchen by setting a timer for the dishes, or it can tell you the weather. It will also entertain you and just simply chill with you if you want it to. It can be treated as a new family member.

Artificial intelligence is the most discussed topic in modern science and the AI developers are working on different prototypes that are supposed to make human lives easier. It will result in the progress of modern society and might be used in the production sector. That way the speed of production might be increased and the supply to the growing population will increase as well.

Vector uses its beamforming microphones to recognize the direction of incoming sounds. So, it will face you if you call its name. It is also designed to portray basic emotions. Like showing happiness when pets on the sensor. It will also glare at you if you handle it roughly. This is a feature that is added to the new version of the Vector, which is great. It adds a lot more fun in the customer experience. It’s grey and gold design also gives it a classy yet friendly look.

See also  How Can Warehouse Management System for eCommerce Increase your Business Profits?

Why Invest in Vector by Anki?

Vector is the result of years of tireless research by the application developers. Vector is a lot more intelligent device than its ancestor, Cozmo. Unlike Cozmo, Vector can recognize voices and respond to commands. It can also register the differences between American and British English and speak back. The voice is robotic but still is considered cute by the users. Overall, the Vector is greatly accepted and loved by the user community and is, no doubt, considered to be one of the greatest artificial intelligence-based products for in-home purposes available in the market.

The price of Vector on Amazon.in is around 21,000 INR and on Amazon.com it is around 250$. It is a very reasonable price for such a smart, entertaining and efficient home assistant.
It will become a comfortable part of the house after a few days and it will not let the humans present in the house feel lonely. It will often visit you just to say a simple ‘Hi’. Its features also include a few fun games.

If you still need any assistance with the Vector, it is recommended to visit Paraminfo. It is one of the best IT solutions company in the middle east, UAE, India and the USA. You will find solutions to any tech-related query of yours on Paraminfo. All you have to do is contact them on the given number or email address.