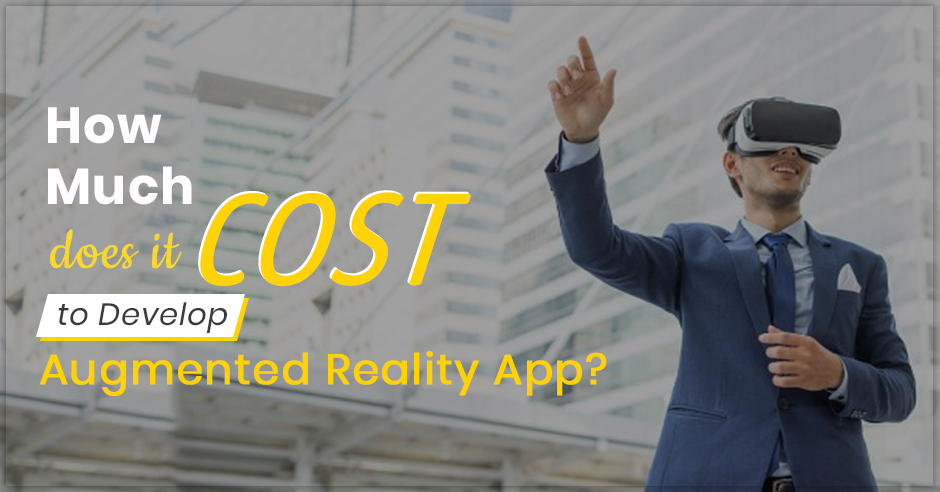 How Much Does it Cost to Develop Augmented Reality App?

An Augmented reality app expands the borders of the real-world situation and creates new possibilities for business. AR’s universality and popularity predict its further growth and this should drive entrepreneurs to consider AR app development to design a digital business. If you have ever considered the possibility of implementing AR in your business, then its cost factor would also have crossed your mind.

According to different studies, and the newest revenue predictions, AR applications are anticipated to reach its optimum peak in 2020. Therefore it is not a surprise surprise that different business sectors and mobile app development companies are plunging into the AR bandwagon. Corporations are understanding the absolute importance and potential in AR application based investments and are seeking ways to profit on them.

How is Business Potential generated due to AR Investments

The truth of AR-based capitalism and the market potential of AR investments is different from any other industry. This kind of a mixed reality application is the subsequent stage of computing which is believed to revolutionizing daily experiences shortly, to a whole new level.

Nowadays even modest businesses, marketing ventures, and mobile app developers are also investing in Augmented Reality. These types of investments have multiple sectors and they also include extensive customer assistance, distribution, advertising, hardware, entertainment, etc. Augmented reality can influence the way people play and exercise– as confirmed by the most simplistic AR app available in the market now i.e the Pokemon GO. AR can also be used to communicate, consume content, work, transact and learn.

The effectiveness of an Augmented Reality app for a company is simply not restricted to training or logistics. Other sectors like marketing and manufacturing, retail, data collection, analytics, and security, can also benefit extremely from the improved visualizations created through augmented reality. An AR app can improve customer engagement and increase accessibility while at the same time provide assistance and accept customer feedback.

Factors that Influence the Cost of Development

Although there is an industry-wide recognition of the commercial potential of AR-based mobile apps for the profitability of a company, there persists a drastic lack of completely developed or rather fully operative mobile applications, accessible in the market.

There are many reasons for the lack of such apps, the major one among them being that the companies fail to understand the dynamics of such an app, working solely on AR. These companies are also unsuccessful when it comes to suitably budgeting their integrated app venture.

1. The platform and Business -model used

AR-based mobile apps are accessible in all shapes and sizes and compatible with both android and ios. The total cost of developing an AR-based app depends on the platform on which the app will be based.

Apart from just the platform, the business design for the commercial version of the app can significantly affect the price of the development of the AR mobile app. These app costs can range from $50 000 to $250,000 or in some extreme cases, it can even go as high as $2,500,000 when the designed app is pretty complex.

2. The complexity of the App

The complexity of an Augmented Reality app is a crucial determining factor that will influence the final price of the mobile app and its subsequent development. It should have a user interface which is extremely important for an AR app. PC or Website apps should have a simpler interface while the smartphone and tablet ones can be a little more complex. A complex app is more expensive than a simpler one.

The app features, functionality and design, influences the costs of developing an AR app. The technical blueprints of the AR app affect its cost.

The creativity of the design and display and the simplicity of the user interface are extremely important. Its generally believed that more pleasant and appealing features an app has, the more time a user spends on it. As the user spends more time on it, the company will make more monetary gains. Hence, the more lucrative an app looks, the more customers it can entice and consequently the development prices go up.

4. The Choice of Firm engaged for Development purpose

The app developers that a company chooses to develop its AR-based is probably one of the biggest factors that affect the cost of the app directly.

The apps built by a big mobile application development company in the development sectors will cost more. The costs can range from $800,000 to 1,500,000 which is pretty expensive. These big companies do not even entertain a client’s call with a limit lower than $500,000.

The Applications that are developed by modest development companies can range between $200,000 to $470,000 and smaller development agencies charge even less.

Some freelancers or small two-unit shops or start-ups who can outsource AR developers can also build fully-functioning apps for moderate prices ranging between $10,000 to $50,000. But these apps can only sustain some of the most basic AR traits and they have a very simple user interface. They are usually produced utilizing free or low-cost app developing tools that are easily accessible online.

Keeping the above factors in mind while considering the cost, you can develop an AR app for your business to suit your needs. It will give your business a boost while enhancing its appeal and generating more engagement from customers.