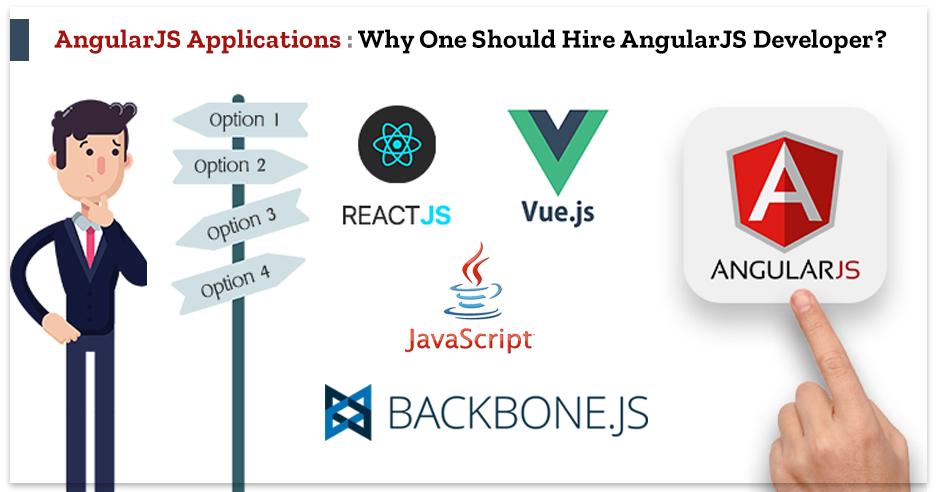 AngularJS Applications: Why One Should Hire AngularJS Developer?

Angular JS is used for developing feature-rich mobile and web apps. Ever since its release in 2010, AngularJS has gained popularity owing to the features functionalities. It has become the dominant framework for professional web development.  Some of the big names in the technology field like PayPal, Guardian, Upwork, Netflix websites are developed based on the AngularJS framework. The framework is lightweight and supports all major browsers. It enables the users to use HTML as the template language. AngularJS is developed by Google and maintained by a group of highly skilled engineers who are always willing to resolve the issues in the framework. In this article, we take a look at angularJS application development and the reasons to hire angular JS developer.

MVC stands for model view controller pattern, which is used to develop software applications. The model layer manages the application data, the view layer displays the data and the controller layer connects both the model and the view layer. It offers an advanced and convenient way to deal with MVC for app developers.

It is another important feature of AngularJS. With the two-way data binding, the user interface changes made in the view layer gets reflected in the underlying data model. In AngularJS both the model and the view layer are constantly updated to stay in sync with each other.

AngularJS has easy to customise components and facilitates developers to make appealing UI for web and mobile apps. The interface is structured and easily manageable making it easy for the developers. The platform utilises HTML for making organised and simplistic UI.

The AngularJS platform is packed with powerful features such as Routing, Animations, API client, form validation, and filters. The framework saves a lot of time and effort which finally reflects on the development cost.

The important feature of AngularJS is that it allows the developers to reuse the code. When it comes to developing a similar web app, it saves time and money.

Why Should One Hire Angular JS Developer in 2019?

The number of websites that use Angular JS has gone down over the last few years. The framework still serves its purpose as a reliable one, but the corporates must adopt the latest version of the framework for compatibility with the latest technologies. To achieve this, you need to hire AngularJS developer to support the development process.

To Transition Your Existing App from AngularJS to Angular

Some of the top websites like Forbes, Upwork, Udemy have made their transition from AnguarJS to Angular as it offers new features under its hood. Some of the features include:

Unlike AngularJS, Angular supports mobile development and lets you make web applications for both mobile and desktop devices. AngularJS, on the other hand, was created as a desktop framework.

The two-way data binding approach relieves the developer for actively controlling DOM (Document Object Model). It saves precious coding time and effort on the part of the developer.

See also  How Much does it Cost to Develop an On-demand Service Application like UrbanClap?

Single page applications offer uninterrupted user experience and play a big role in retaining them. If the website features hassle-free navigation and easier to use, then it increases the likelihood of converting a regular customer into recurring one.

Compatible with the latest Versions:

Angular is compatible with all the latest versions and allows the developers to write efficient code in their preferred language. On the contrary, AngularJS runs only on Javascript.

In case, you have been struggling to find the best mobile application development company, then you are in the right place. ParamInfo is a premier Angular design and development company located that holds more than a decade of experience in delivering quality products to clients across the globe. The company holds the expertise to make use of the powerful features of AngualrJS for making dynamic and agile friendly apps. The AngualrJS developers at ParamInfo are expertise in handling innovative projects and deliver them within the stipulated timelines. The developers are abreast with all the latest features of AngularJS. What are you waiting for? You can now hire a developer from ParamInfo on an hourly or full-time basis for building dynamic web apps.