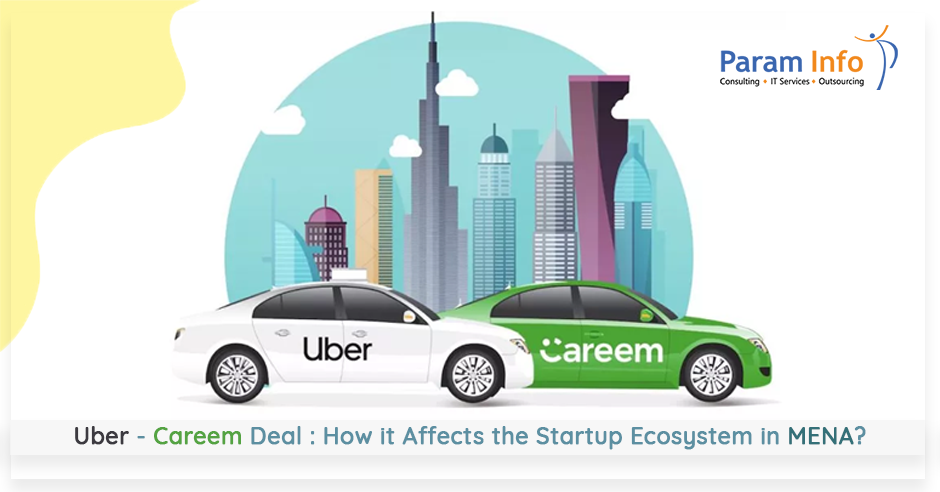 Uber-Careem Deal: How it Affects the Startup Ecosystem in MENA?

By Elina SamantraiMay 2, 2019No Comments

On-demand taxi-hailing service, Uber has been an inspiration for many entrepreneurs and startups around the world. Many startups and companies are on the look for an ideal mobile app development company to develop an app like Uber. Since its inception in 2009 in San Francisco, Uber took giant strides and has been successful in conquering more than 72 countries across the globe. It is not an exaggeration to say that Uber can be hailed as the King of taxi-hailing services.

However, Uber has been incurring severe losses in the recent past. It can be attributed to the increased competition with its rivals and it has forced Uber to withdraw its services from China and other South-East Asian countries. In the wake of all these, there has been the talk of Uber’s merger with another taxi-hailing giant Careem.

Not many are well- aware Uber app is a combination of three mobile apps that include admin app, the driver app, and the customer app. Each of them has their own set of features. The ideal way for app developers to build a Uber-like app is to make the basic version of the app in the beginning before introducing an advanced set of features.

In this section, let’s discuss in depth why Uber has been considering a possible merger with Careem. Uber has been on the receiving end and has to bear losses in South East Asian countries like China and Singapore. In China, owing to the stiff competition from the local taxi-hailing service Didi, Uber was forced to sell its services to its arch-rival in a deal worth $35 billion. On similar lines, Uber has been forced to exit from the South-East Asian market owing to the stiff competition from Singapore based taxi-hailing service GRAB. As part of it, Uber claimed a stake of 27.5% in GRAB to withdraw its services from Singapore.

US has been a major market for Uber but has been facing stiff competition from its rival LYFT. The market share of LYFT rose from 15 to 22% and at the same time, the market of Uber fell from 83 to 74%. As a result, Uber has been looking to maintain its dominance in larger markets such as the US, India, Brazil and vying to form a partnership with its rivals in smaller markets.

Careem, on the other hand, has been expanding exponentially in the middle-east nations. Armed with a fleet of 1 million drivers, the taxi-hailing service has achieved the distinction of being the first company to cross $1 billion mark. Careem operates in more than 100 countries. The earlier deals with Didi and GRAB didn’t go as planned and that is the reason Uber might be thinking of forming a deal with Careem.

Whenever a merger takes place between larger companies, there are many possible implications that may be positive as well as negative. Let’s dive in detail and check the possible outcomes of the merger.

The Uber-Careem merger would offer a wonderful opportunity for other local taxi hailing services. Much of the success that Careem achieved can be attributed to it being based in Dubai. As it is a local company, the commuters in the MENA(Middle East & North Africa) region treated it as their company. The local hailing services would very well fill this void and may very well serve as an alternative local service provider.

Uber and Careem are the major players when it comes to taxi-hailing service providers in the MENA region. So, when two giants combine, there will obviously be a rise in the customer’s expectations to receive better services than before. It would ultimately put pressure on both the companies to meet the expectations of the commuters.

Uber Can Stay away from legal Matters:

Uber has been at the center of many many legal controversies that include allegations against its drivers of sexual assault, data breaches, and others. Hence, Uber has been subjected to partial and full ban in various countries. So, a merger with native taxi-hailing service like Careem would minimise the chances of Uber getting banned in the region.

Uber and Careem are the two major taxi-hailing companies and their merger leads to monopoly and a rise in the fares. As there would be no available alternatives, the companies can increase the fare as much as they need. There is a chance to fill this void with some local company. But until then, the commuters of the MENA region have to bear the brunt of increased fare charges.

When a merger happens, the two companies look to streamline their workforce and hence there would be employee layoffs. Also, there would be a change in the office culture; Careem is a local company and boasts employees with Middle East culture. The merger leads to the introduction of western culture and this would lead to cultural differences among the employees.

Uber-Careem deal drastically impacts the taxi-hailing ecosystem of the MENA region. It would offer an excellent opportunity for the new local players to enter the market. The local players can offer lesser fare rates than Uber and Careem. It offers a golden opportunity for them to emerge as a leading local indigenous firm. The impacts of the merger on the fare charges and on the employees is set to be decided in the long run.