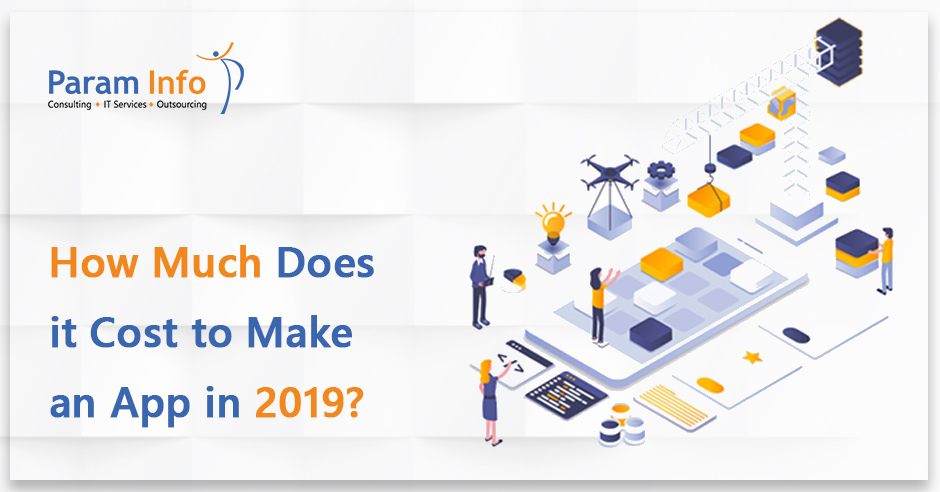 How Much Does it Cost to Make an App in 2019? [App Cost Calculator]

Smartphone usage has been on the rise days owing primarily to the availability of mobile phones at lower prices and affordable data plans. Many businesses these days thrive on mobile app development for growth and sustenance. It is quite tricky to arrive at an average cost for app development,  as it involves a multitude of factors that impact the overall development cost to make an app.

Before we provide you with an estimated cost, it is critical to analyse various factors that may impact the final output. For instance, the cost of an app development varies depending on the type of platform, OS version, types of application, outsourcing or in-house development, development prices across locations, development time, and so on. Let’s go through every step in a detailed manner.

Ask yourself multiple questions before diving into app development

Know your customer base:

Target audience form the key criteria for the success of an app. It is the target audience who acts as a wheel of revenue by purchasing the app. In case, you fail to identify your target audience; it is imminent that your app gets erased from the competition in no time.

Shoot yourself with many questions:

Some of them include the ideal platform for the target audience, free or paid apps, in-app purchases, whether the app offers any display advertisements and the likes.

Have a clear idea of what your app is going to be! Will it be a free app, paid app or an e-commerce app. Each of them has their unique ways of generating income.

Paid apps make money based on the number of user downloads. Setting the right price based on the willingness of the customers is critical.

Unlike the free and the paid apps, e-commerce apps features various products displayed on its platform. They make the money by selling the products on its platform and derives a set commission on every purchase.

A majority of the applications basically falls under three categories such as Web application, native and hybrid applications. Let’s have a look at each category in brief.

With increased smartphone penetration by the passing day, there has been a visible surge in the use of number of users preferring smartphones for transactions. The websites which are optimised for mobile users constitute the web applications.

The applications are developed in a way that ensures optimum performance of the app across a specific platform; be it iOS or Android.

The apps are made using single programming language and are flexible to function across multiple platforms.

The pricing of app development also varies depending on the preferred platform for application development; Native and Cross-platform. Each platform has its own set of pros and cons. By careful understanding of the pros and cons helps one choose the ideal platform for the mobile app.

Here the apps are developed by using platform-specific programming languages; For instance, to develop an Android app, the app developers use Kotlin, Java and Python. Similarly, iOS apps are made using languages such as Swift-C and Angular JS.

Native apps offer cons such as high performance, better user interface and better positioning of the apps on the app stores. If you take a look at the cons, native apps are costly and time-consuming, besides they are restricted to only a single platform and may result in missed opportunities.

On the flipside,cross-platform applications are made using a single programming code and are compatible to run across multiple devices and platforms. Some of the cons of Cross-platform apps include the affordability, easier and faster deployment and wider audience reach. If you check the cons, there are performance issues and user experience issues associated with cross-platform app development.

There are two versions to choose from, iOS and the Android version. Before you pick a version for the mobile app, ensure to go through and compare different metrics before arriving at a decision. Identify the target audience for your mobile app; keep a close watch on the average users across each platform, user demographics and so on. It further depends on revenue goal, project timeline, app maintenance budget and more.

Android version of the mobile app is best suited for the audience in up and coming markets like Asia, Africa and Latin America. Making an app for Android allows more flexibility with features.

iOS version is best suited for the audience in Europe, Australia and North America. A minimum amount of time and budget is enough to develop an iOS app.

The demographics of the audience needed features, development timeline and budget helps decide the right OS version among Android and iOS.

Estimating the average time for app design and development, it is very easy to arrive at the approximate costs for app development.

There are primarily five different stages of app development where you need to invest amount. A good estimate of the cost incurred at various stages helps you plan the budget for app development accordingly.

The estimated average time for design and development of an app can go anywhere between 300-600 hours. However, it further varies depending on the company and the app complexity. If the app development involves the incorporation of advanced features, the average time may shoot up to 1000 hours. Also, consider the complexity of the app and the resources used for the app. By taking both the above factors and correlating the time for app development with hourly estimates gives an  idea of the cost that is very much closer to the actual cost of app development.

Most of the businesses tend to focus only on the amount of money required for app development and tend to ignore or not consider the costs post development. The app can be considered as complete after it is fully launched with the support functions in place. The success of an app involves the investment of additional amount for marketing, background support and also for frequent updates.

Complicating the situation further, many companies have conducted surveys offering conflicting responses about the cost of building an app. There has been wide-spectrum of the reported price ranges starting from $11537 and around $ 50,000. So, it makes it quite tough to pinpoint an accurate figure for app development.

The estimates only give an idea of the average cost for the app development. The actual amount varies depending on the needs and choice options. You may end up paying a lot more or less depending on your needs.

Consult an expert to arrive at probable figures

Finally, consulting an expert is an advisable option to gain critical insights of the app development and the probable cost. An expert has in-depth knowledge of both the business side as well as the technicalities and would give an accurate estimate.