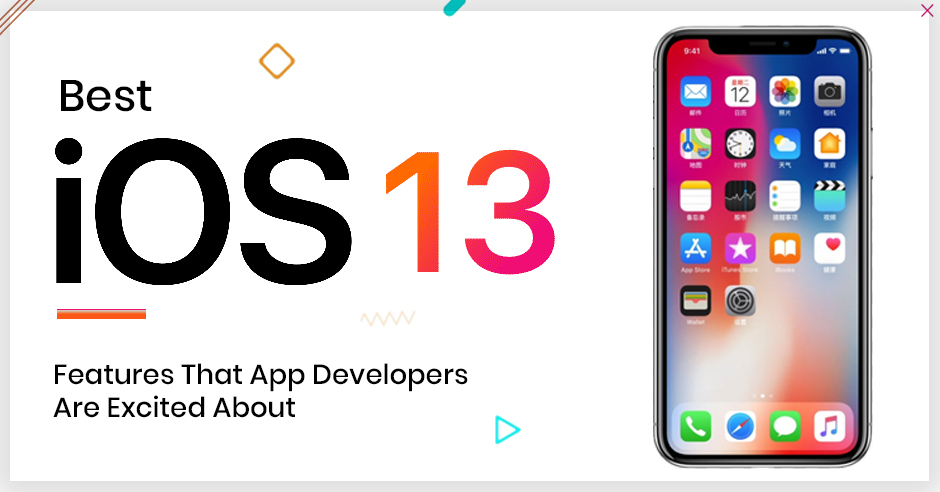 Best iOS 13 Features That App Developers Are Excited About

At the Apple Worldwide Developers Conference 2019 – an event where tech-enthusiasts and app developers from around the world gather for knowledge-sharing sessions – Apple’s keynote on iOS 13 garnered most of the attention. Although features like the “Dark Mode” were highly anticipated and discussed, Apple revealed various other features to excite consumers worldwide.

The iOS 13 is expected to improve multitasking capabilities, provide a seamless Safari experience, and offer various fun-features like turning the device into a mobile karaoke machine.

Whether you are a mobile application development company or an independent developer yourself, knowing more about the feature-rich iOS 13 should be on your priority list. In this blog, we are highlighting all the latest upgrades Apple is coming up with, and covering how the coder’s community is excited about these advancements.

This was probably one of the most anticipated features announced by Apple during the event. Nonetheless, Dark Mode was still the highlight amongst both consumers and developers. The new feature allows the third-party developers to tap into the Dark Mode API and modify their respective apps’ compatibility. This comprehensive theme would be applicable to almost every app downloaded into the device.

The days of a complete 360-degree street view are here with Apple announcing the feature-laden iOS 13. The company modified Apple Maps in order to provide more comprehensive navigation features for the user on the street. Apple introduced profound real-time accessibility, high resolution 3 Dimensional graphics, street-level views, and much more to elevate the navigation game.

The constant yearning to reinvent photo applications amongst mobile app developers is evident in every new mobile launch, irrespective of the brand. We see new features, editing tools, and embellishments to attract the photo-frenzy generation. During the WWDC 2019, Apple wasn’t behindhand in stating how iOS 13 is overthrowing all previous photo apps. Features like a quicker images finder, automating still shots video games, simple image bolsters the powerful editing tools in the latest iOS version.

The new camera update of iOS 13 comes with an adjustable portrait lighting effect, which will let users modify light intensity to get a custom picture. Imbibing the capabilities of professional studio shoots, this feature is designed to empower users to self-adjust lighting while sharpening the eyes or smoothening the face. The updated camera also has a high-key light mono app for monochromatic portrait photos.

The Siri framework comes with some major upgrades in iOS 13. Apart from making the latest version ultra-realistic, Siri will now support all third-party applications as well. This promises to open a whole new world for the users, where they would now be able to give internal commands to their favorite third-party apps.

Security has always been at the forefront of every Apple product. Taking the stride forward, iOS 13 now provides a unique “Sign-in with Apple” option for using third-party applications. An interesting offering for privacy concerned users, this feature will allow sign-in using the existing Apple ID. Third-party apps will only receive users name and email address, which can also be modified by Apple on request. This means Apple can create and share a different ID with apps while redirecting communication to the user’s real ID. It promises no-user-activity-tracking and limited data exposure.

Apple and its team of engineers have always been known as a group of futuristic and conscious technology builders. Apple’s keynote on iOS 13 had multiple revolutionary aspects to hold the interests of coders around the world. The interesting features and technical advancements announced by the company during the WWDC 2019 has made many mobile application development companies excited about exploring the numerous possibilities.

If you are looking for a professional and experienced iOS app development company for an interesting iOS application idea, piLOBI’s team of highly-skilled developers can offer you seamless services and optimum support.